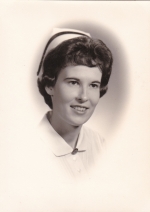 Born on August 9, 1938 in Springfield, MA she was the loving daughter of the late John and Eileen (O’Hare) Sullivan.

She was a 1956 graduate of Cathedral High School in Springfield.  In 1959 she graduated from the Mercy Hospital School of Nursing and received her BS degree in Nursing from Boston College in 1967.

She was employed as a visiting nurse in the Springfield and Massachusetts area.

Anne was a member of the St. Thomas Parish in West Springfield.

She is survived by her brother: Robert Sullivan and his wife Connie (Roger) Sullivan of New Jersey; her brother in law James LaCroix of North Attleboro; sister in law Lorraine (Casineau) Sullivan of Missouri and a host of nieces and nephews living across the United States.

Anne was predeceased by her twin sister Marie LaCroix, brother and sister in law John J. and Ellie Sullivan, Jr. and her brother Richard Sullivan.

Calling hours for Anne will be held on Tuesday April 9, 2019 in the Sperry & McHoul Funeral Home, 15 Grove St., North Attleboro from 9-9:45 a.m. A mass of Christian burial will held immediately after visitation at 10am in St. Mark’s Church, 105 Stanley St., Attleboro Falls. Burial to follow at St. Mary’s Cemetery, Towne St., North Attleboro.