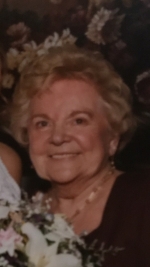 NORTH ATTLEBORO – Gertrude May Kreimendahl, 95, of North Attleboro passed away Monday, October 23, 2017 at Sturdy Memorial Hospital, Attleboro surrounded by her devoted family after a brief illness.  She was the wife of the late Julius R. Kreimendahl.

Born February 18, 1922 in Cranston, RI, she was a daughter of the late Daniel and Eva (Towne) Bears.

Gertrude grew up in Attleboro and attended both Woburn High School and Attleboro High School.  She lived many years in Mansfield, where she raised her children, and has been a resident of North Attleboro since 2008.

She worked at Texas Instruments in Attleboro for 25 years before retiring in 1984.

Gertrude enjoyed knitting and crocheting and was active at the Senior Center.  She also enjoyed swimming in the lake in her younger days.

And two great-great-grandchildren: Silas and Ariella.

Visiting hours will be held on Thursday, October 26 from 6-7:30 p.m. in the Sperry & McHoul Funeral Home, 15 Grove Street, North Attleboro.  A funeral service will be held at the conclusion of visitation at 7:30 p.m.  Burial will be held privately at Spring Brook Cemetery, Mansfield at a later date.