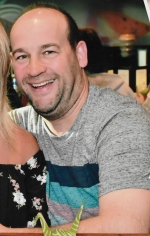 NORTH ATTLEBORO – Christopher John Cornetta, 51, of Kelley Boulevard passed away unexpectedly on Monday, March 4, 2019 at home.  He was the loving husband of Melissa (Coyle) Cornetta for 25 years.

Born June 29, 1967 in Attleboro, he was a son of Cecile (Clavette) Cornetta of North Attleboro and the late Alfred Cornetta.

He graduated from the Bay State School of Appliances and was the owner of Cornetta Appliances for many years.  He became a call firefighter for the North Attleboro Fire Department in 1989 and was appointed full-time on August 1, 1993.

Chris was a huge fan of the New England Patriots and a season ticket holder for over 35 years.  He was known for his epic tailgates at games and was Patriots “Fan of the Week” several years ago.  He also coached Pop Warner Football and Little League.

To sign an online guestbook for Chris, please visit www.sperry-mchoul.com.