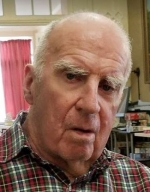 Jack was born on December 26, 1931, he was the son of Edgar Cullen McGowan and Elizabeth (Carroll) McGowan formerly of Broad Street, North Attleboro.  He was raised in North Attleboro attended North Attleboro schools graduating from the high school in 1949 where he competed for his beloved Red Rocketeers on their football team.  He attended prep school at Marianapolis Prep in Thompson, CT and then followed his father and brother into the Armed Service. Specifically, Jack chose to join the US Navy and was assigned to Submarine duty serving time on the USS Sablefish Submarine.

While in the US Navy, Jack married the former Mary-Ellen Rhind and subsequently settled in the Attleboro area.  Shortly thereafter, Jack began what turned out to be a 30 plus year career with The New England Telephone Company specializing in corporate communications and worked for NE Telephone & Telegraph in their Providence office before accepting a promotion to be the New England Sales Manager headquartered in Boston.  After retiring early from the Telephone company in 1986, he began a long relationship as a communication consultant with the Radisson Hotel chain in Boston.

A longtime resident of Boston, Chelsea and Charlestown, MA he was the first resident to move into the Charlestown Naval Yard Condominium Complex and was selected to be part of the ribbon cutting ceremony commemorating the opening of the housing complex. He also resided in Quechee, VT for a number of years.

A lifelong sports fan, Jack was a loyal follower of all of the Boston pro and college sports teams, an expert skier and became an avid long-distance runner at the age of 40, participating in numerous road races of varying distances culminating in his crowning running achievement of competing and finishing in the New York Marathon as well as his favorite sports event, The Boston Marathon in 1977.

Later in life, Jack was consistently seen cheering on his children and grandchildren as they participated in various athletic teams for North Attleboro and Bishop Feehan High Schools.

Visiting hours on Tuesday, January 29, 2019 from 4-7 p.m. at Sperry & McHoul Funeral Home, 15 Grove Street, North Attleboro.  A funeral service with U.S. Navy Honors will be held at the conclusion of visiting hours in the funeral home at 7 p.m.  Burial will be held privately at a later date.

In lieu of flowers, donations may be made to the “Colleen Mason Scholarship Fund” c/o Mascoma Savings Bank, 255 West Street, Keene, NH 03431.