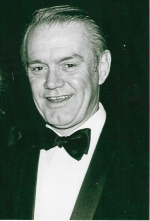 NORTH ATTLEBORO – Richard L. Sherman, devoted father and husband, master of rhetoric and one of the last great storytellers, passed away on December 31, 2018 of natural causes at the age of 89.  Sherman is survived by his beloved wife of 67 years, Nancy Schmidt Sherman, his daughter Deborah Hipp (and husband Mark) and his son Robert Sherman (wife Darcy), as well as grandchildren: Katharine Hipp and Olivia, Ian, and Calvin Sherman.  Sherman’s eldest son, Jeffrey, passed away in January of 2018.

A lifelong resident of North Attleboro, Sherman was deeply involved in the community.  Among Sherman’s many contributions to North Attleboro include authoring a Bicentennial Commission publication “North Attleboro, An Affectionate History”.  Sherman served for many years as a Trustee of Richards Memorial Library, as well as on the North Attleboro School Committee, Millennium Celebration Committee (Chairman) and Historical Society.  A member of the Civil War Round Table, Sherman produced a highly acclaimed monograph on General Joshua Lawrence Chamberlain commissioned by the Chamberlain Corps.

Sherman was a proud World War II veteran, serving in the U.S. Army in Trieste, Italy.

After graduating from Brown University in 1952 with a BA in English, Sherman, a newspaperman first and foremost, spent over 25 years writing for local papers including the Attleboro Sun Chronicle, Pawtucket Times, and Providence Journal.  He hosted a news show on WARA radio and was the editor of the New Leader, where his column ‘By the Way’, was eagerly anticipated each week.

An accomplished high school and college athlete, Sherman was an avid New England sports fan and had the honor of producing the first Patriots Yearbook. Sherman continued to contribute his journalistic skills to the community until 2017, writing articles on the history of North Attleboro for the Free Press.

Following his career in journalism, Sherman joined the corporate world, working in Corporate Communications for The Foxboro Company and as Director of Public Relations for the Raytheon Company.

Visiting hours will be held on Saturday, January 19 from 1-3 p.m. at Sperry & McHoul Funeral Home, 15 Grove Street, North Attleboro.  A service will immediately follow visitation in the funeral home at 3 p.m.

To sign an online guestbook for Sherman, please visit www.sperry-mchoul.com.