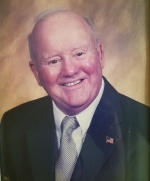 George was the son of a fisherman, Jose Joaquin Maciel and Maria Souza Maciel from the Sao Miguel and Sao Jorge Islands.  He was extremely proud of his Azorean Portuguese heritage.  George attended South Dartmouth High School where he was an all-star running back but left high school his senior year prior to his 17th birthday to enlist in the Navy.

George was a WWII Veteran serving in the Navy on an LSM 376 in the Pacific Theater.  After the War he worked for the Cook Horton Company and earned his Business Management Certification from the U.R.I. Extension School.  George became the General Manager and Vice President of Valentine Tool and Stamping in Norton, MA., where he and his family were longtime residents of Norton.  He was an active member of St Mary’s Parish.  George retired to New Bern, NC., where he worked part-time until he was in his mid-80’s at the Craven Regional Airport.  An avid golfer he had memberships at Highland Country Club in Attleboro, MA. and Quaker Neck Country Club in Trenton, NC.  In 2008, he returned to Massachusetts where he resided in Sandwich, MA.

George is survived by his bride of 53 years, Eleanor (McCracken) Maciel, his son Joseph and wife Susan of Sandwich, MA., his son Tomas of Monroe, WA., his sister Ida Roque of Norton, MA., 4 grandchildren; Tomas, Benjamin, Mathew and Brenna, many nieces and nephews, one nephew, Ryan McCracken, should be recognized as he was more like George’s 3rd son.

George was preceded in death by his 4 brothers; John, Luciano, Joseph and Albert as well as his older sister Clementina.